Because..
The need in Uganda is great. Schools lack supplies, electricity, and even basic plumbing. There are little to no social services that exist to serve these communities, and the families and children we serve are deeply moved by our willingness to work alongside them to increase educational, social, and economic opportunities. 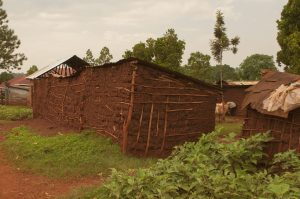 Importnat Facts from the United Nations:

From the CIA fact book:

How do people acquire water?

Whenever it rains, some people collect water from the roof of the house and this takes us some time. Whenever people use all the rain water from the containers, they buy water from the national water and sewerage cooperation. The piped water that people buy from national water, is seasonal. Some times it disappears for weeks. Recently the national water has set up centers in people’s homes where people can go and buy the water for using in their homes. People have to line up with jerry cans to collect the water. Sometimes there is a center with 30 jerry cans. Some people have no money to buy water and so they go at night and cut the plastic pipe and steal the water. To be connected to the national pipes, people must pay money to the company and also pay monthly bills. People who can not afford this will go and pay and bring some water into their homes and then they sell the water to the poor in order for them to be able to pay for their monthly bills from the national water.

Water is acquired a few different ways and it depends on how much money a family has that will determine how they access water. You can pay to have a faucet (pictured above) installed on your residence from the national water source and they will pay a monthly fee of about $50 a month.

One can buy bottled water, however some are unable to afford it.

Some people can afford indoor plumbing and water from the national water source, which would be used in showers, sinks, and toilets. Many are unable to afford a monthly water bill and do not have indoor plumbing and will pay to use other people’s outdoor water faucets. Some people are far from the market and poor so they will go to the nearby swamp for water. Some may even steal water at night from the faucets.

There are people who sell water in a bag though it may not be clean. However, some people do buy it.

In Buluuta – a village 2.5 hours from Mafubira. Their source of water is Lake Victoria or the swamp. They are in need of a water well.

Why do some parents not take their children to the hospital?

Most people can’t afford charges from the hospitals. There are some government hospitals in the area and people are meant to receive free medication there but the hospital often has no drugs and not enough medical staff in those facilities. When people go there, they are told to buy the drugs that is why those who can’t afford to buy drugs leave and come go to Lufafa for help. Some private hospitals around are well equipt and well staffed, however they are very expensive for the local poor people to afford.

What types of surgeries and treatments does the hospital in Jinja ( about a 15 minute ride from Mafubira) provide?

Some people wait long times at the hospital and end up leaving. Some private hospitals around are well equipt and well staffed but very expensive for the local poor people to afford. Jinja Hospital perfoms sugeries like laporatomy, amputation, incision and drainage, Caesarian section, and some minor sugeries. Most serious surgeries are reffered to better hospitals in Kampala, which is about 4 hours away. Jinja has a problem that it lacks enough staffing and specialists. It has only one surgeon, one physician, and some few other doctors. It is these few docters who rotate in most departments, yet they are also committed to other private hospitals and their own clinics. When they come to Jinja Hospital they only work on a few cases and leave out the rest. They have less time for a patient in a government hospital.

Do the local churches in the area help out?

There are more than 12 churches here. Even when you look at their shape, it clearly explains the situation. Some are just small tents, some are in people’s houses, some are under the shade of trees. When it rains it means no prayers that day. Some churches are built, but not finished. Few individuals have come up to help but they mostly help relatives and that’s it. People may lack funds but they offer skills to help the ministry.

This link is a great place to start learning about Uganda

In Mafubira they speak English and Lusoga, however there are over 80 different languages in that district. The official languages are English and Swahili.

What would you like to learn about Lufafa’s community? Send us an email and ask us!